Changes to St Swithun’s church in the 1870s.

Architect J. M. Hooker (1829-1906) restored and refitted the church from 1874-76. He replaced Wyatt’s plastered ceiling with a different roof in the nave, and probably altered the aisle ceilings as well. The walls were stripped of the plaster and whitewash which had covered up the stonework. It is possible that 2 windows were altered at this time, but most were untouched. The chancel was not lengthened. Wyatt’s plain chancel arch remained intact. However, the eastern bay of the nave- the bay towards the east window, became part of the sanctuary. This bay was raised to create choir stalls. The space around the choir was paved with tiles. 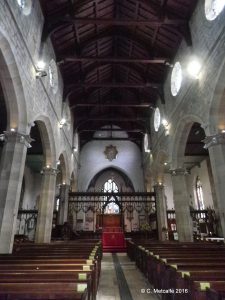 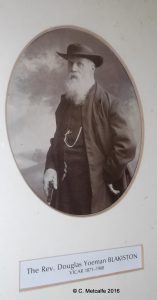 Other changes included the removal of the old deal pews, which were about 4 feet high and used to have the names of the farms or houses to which they were appropriated. This apparently cost £858. The present oak pews were installed. There was some opposition to these changes. The author of the 1946 guide book to the church wrote ‘The good work roused opposition in some quarters but the general atttitude seems best described in the Latin phrase ”Fieri non debuit factum valet”- It ought not to have been done, it has been done, it stands‘. According to Mr Leppard’s book, A History of East Grinstead, the Rev’d Blakiston had originally trained as an artist. 2 of his paintings are still in the Vicar’s vestry. 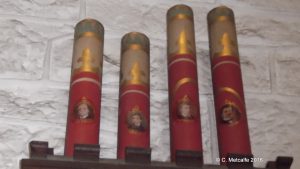 The Rev’d Blakiston also painted portraits of some parishioners and of one of his sons, who predeceased him, on 4 pipes from the old organ. These are on the north wall in the Chapel of the Nativity. The cover for the font has an inscription saying that it was given in memory of Douglas Blakiston. 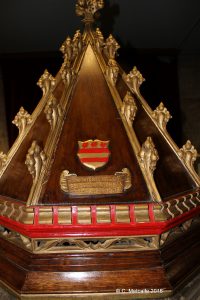 The church was closed for a time for the work on the roof and for the reordering of the chancel. It was possibly during these alterations that the tessellated pavement made by prisoners was installed. By tradition, one of the prisoners who worked on the mosaic was Constance Kent, whose little half- brother was found dead at the family home in Wiltshire in 1860. Constance confessed to the murder in 1865 and spent 20 years in various prisons. I have not been able to find any direct evidence that Constance Kent was involved in creating this flooring, however. Evidence about the installation of this mosaic is also lacking. It seems likely that the lay rector, the Rev’d C.W.P. Crawfurd, who was responsible for the maintenance of the chancel at this time, arranged it. An entry in W.W Hills The History of East Grinstead (1906), lists various donors and fixtures in the church, including ‘The Restoration of the Chancel -The Rev’d C.W.P. Crawfurd.’

By the late 1870s, the church had the present roof, the present pews, and the raised section where the choir still sit. The church was beginning to look as it does today. However, there were still more changes to come in the form of stained glass windows, and other fittings.

Sources:
I am very grateful to Mr M. Leppard for conversations and correspondence about the supposed Constance Kent tessellated pavement in St Swithun’s church.