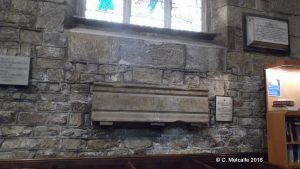 This is a gravestone mounted on the south wall of St Swithun’s church, with the words:

‘In the Cold Ground she now is laid
It’s for a debt she now hath payd
It is a debt none can outstand
But must be payd upon demand.’ 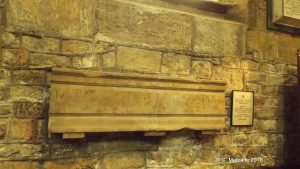 This gloomy memorial is to Mary, wife to John Newnan, and daughter of Jane Thorp, and dated 1737. This information comes from the 1946 Guide to St Swithun’s, which states that the wording is on the obverse side of the stone. ‘Newnan’ could be a typing error for Newman, of course.

This monument begs a lot of questions. Who was Mary and why is the gravestone mounted on the south wall as a monument?

The tower of St Swithun’s collapsed in 1785, causing enormous destruction. During the rebuilding, monuments were ‘restored’. (In the case of the monument to Dame Katherine Grey, who died in 1505, the wrong central figure was put in.) Was this monument to Mary put up where people thought that it had been before? Did friends or descendants remember Mary and want her name to live on? Was it a gravestone that was damaged by the fall of the tower and brought inside? It has presumably become seperated from Mary’s body, so where does she now lie ‘in the cold ground’? The family must have been people with a reasonable amount of money, to afford a large inscribed grave stone like this.

The writer of the 1946 Guide to St Swithun’s must have seen the obverse side of the stone and its inscription, or he must have read about the inscription from someone who had seen it. Was the monument dismantled at some point, perhaps for cleaning?

What of the wording? I assume that the ‘debt that none can withstand’ refers to the fact that we all die one day, and to the debt that Christians believe we owe to Jesus for coming to earth to redeem us. Perhaps the inscription was written for a very religious family. The names Newman/Newnan and Thorp do not appear amongst the list of vicars of this church, inscribed on boards inside the church porch. The inscription apparently only mentions her mother, Jane Thorp, which is rather unusual. Inscriptions often mentioned a woman’s father to show her status. Perhaps Jane Thorp was a widow, or perhaps Mary predeceased Jane.

Finally, I wonder if anyone knows anything of Mary, her husband, John, or her mother Jane Thorp? This striking monument with its doom laden inscription is a curiosity, but we seem to know very little about it.