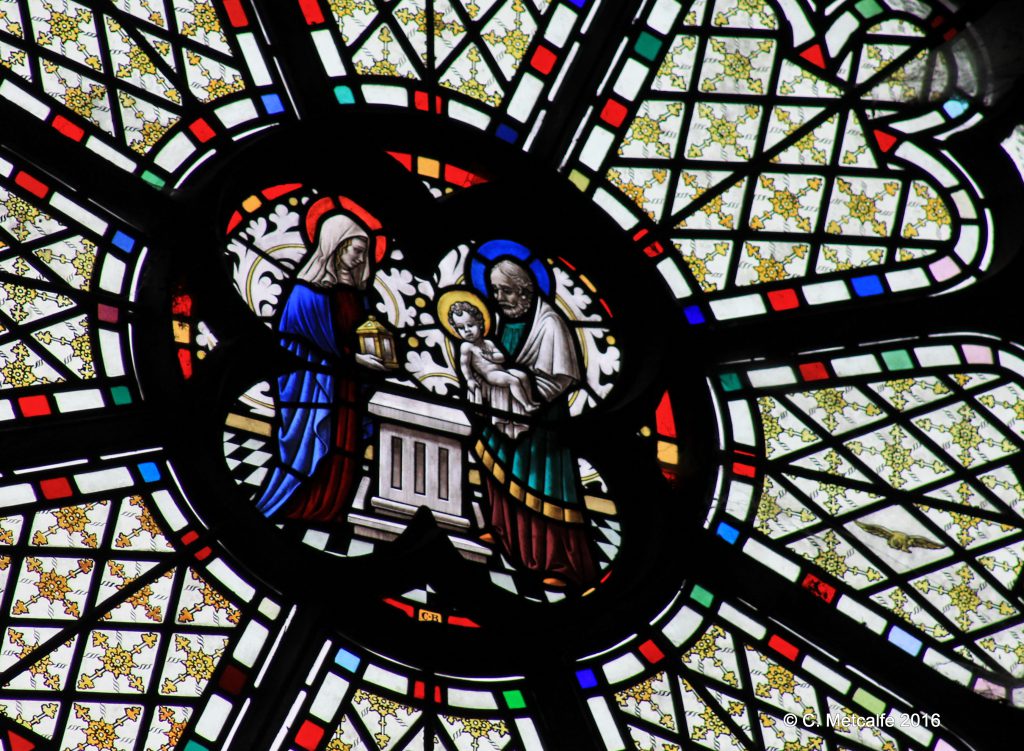 In St Swithun’s church, the fifth clerestory window from the altar, high up on the right hand or south side, is perhaps the most famous window because it has the flying Guinea Pig in the decorative panes surrounding the central picture. The Guinea Pig is very hard to spot, but it helps if you know whereabouts to look.

The ‘Guinea Pig’ name was chosen by airmen being treated for severe burns at the Queen Victoria Hospital in East Grinstead, during the Second World War, for their Club. (The hospital was then called The Queen Victoria Cottage Hospital). Treatment was often lengthy and painful, involving multiple operations, skin grafts, and growing new skin. Archibald McIndoe- later Sir Archibald McIndoe, now honoured by a statue outside Sackville College- arrived at the hospital in 1939, to lead a unit for treating the anticipated severe burns and injuries to airmen. Treatment was pioneering and experimental, which is why the airmen called themselves ‘Guinea Pigs’, after animals used in experiments. McIndoe was concerned for the whole person, not just the injuries. East Grinstead has become known as the ‘Town That Did Not Stare’ at these young men with their severe injuries and the effects of the various stages of their treatment. The Guinea Pig Club was formed as a recreational club for Allied Aircrew who had undergone at least 2 operations at the hospital, with McIndoe as its President.

During the late 1980s, these clerestory windows on the south side were installed thanks to generous patrons, listed on a board outside the Vicar’s Vestry. Some donors asked for their pets to be depicted, so we have the 3 heads of dogs and a cat, if you can find them. This last window has the flying Guinea Pig, which seems entirely appropriate for the town of East Grinstead.

The central scene, within the roundel, is poignant in a different way. It depicts the Presentation of the Baby Jesus at the Temple, in Jerusalem, 40 days after His birth in such humble circumstances. Presentation of the first born male and ritual purification of the Mother were required, in obedience to the Torah. Parents would sacrifice a lamb, or, if they were poor, a pair of turtle doves or 2 young pigeons. According to the Gospel of St Luke, Joseph and Mary gave the birds, not the lamb, so they were probably quite poor.

This was the occasion when Simeon, an old, devout man who had been promised that he would not see death before he had seen the Lord’s Christ, took the Child in his arms and spoke the words which became our lovely anthem ‘Nunc Dimittis’: ‘Lord now lettest thou thy servant depart in peace, for mine eyes have seen thy salvation’.  The very elderly widow and prophetess, Anna, was also present. She recognised Jesus as our Saviour and gave thanks to God.

Simeon and Anna are depicted in another window in St Swithun’s, inside the

Memorial Chapel, on the south wall. They are the 2 figures in the lower left side of the window.

We are grateful to the donors of all the windows. The fifth clerestory window lets in the light, illustrates the life of Christ and reminds us of those injured in the War and those who treated them. I wonder if St Swithun’s is the only church with a picture of a Guinea Pig in its windows?