The East Window in St Swithun’s church was designed by Messrs Hardman in 1879, and was installed following the restoration of the church from 1874. The Vicar was the Rev’d Douglas Blakiston. According to a brass plaque, the east window was given by Elizabeth H. Clarke of Frampost. The plaque reads: 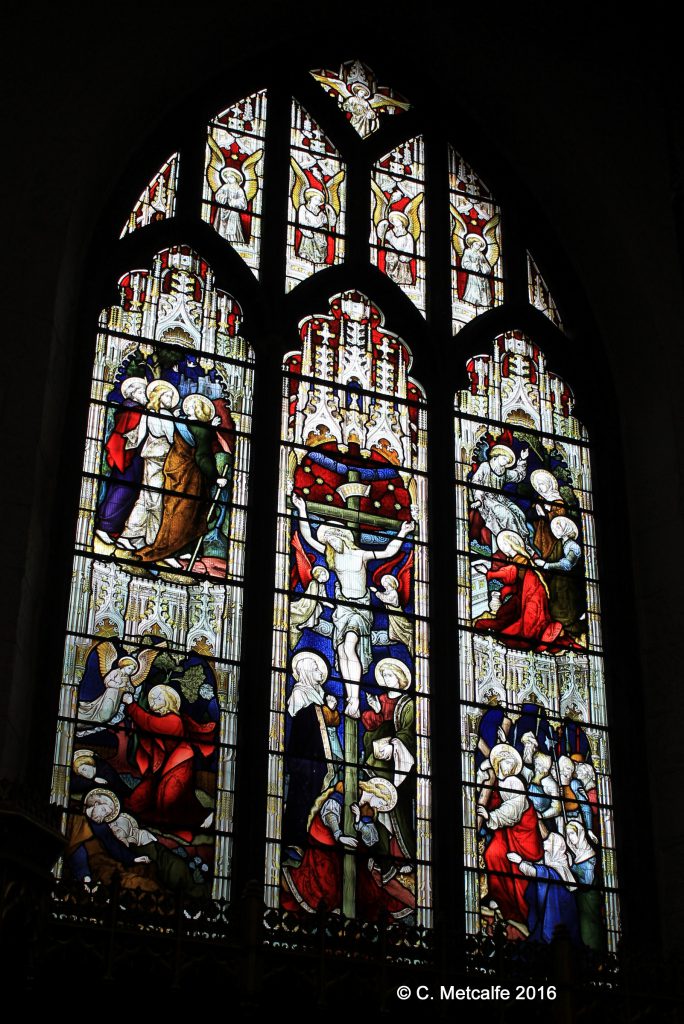 ‘To the glory of God and in loving memory of her parents, the East window is dedicated by Elizabeth H. Clarke, with the consent of the lay Rector, on the Feast of St Michael and All Angels, 1879‘.

The window depicts the Crucifixion in the centre, and 4 scenes from the New Testament: The Agony in the Garden, Christ Bearing the Cross, St Mary Magdalen at the Tomb, and the Disciples on the Road to Emmaus.

Stained glass windows can be found in other churches dating from as far back as the medieval period. They are sometimes known as ‘the poor man’s Bible’ because they illustrated scenes from the Bible, which not everyone could read, even though they knew the church services by rote. In England under King Edward VI (1549-53) and again during the English Civil War period and under the rule of Oliver Cromwell, (1640s and 50s), stained glass was sometimes smashed deliberately if considered too ‘idolatrous’.

This late nineteenth-century stained glass enhances the church, especially when sunlight streams in through the coloured panes.

The Feast of St Michael and All Angels is on 29 September. Traditionally, Michaelmas marked the end and the new beginning of the husbandman’s year.

Where was Frampost? According to Google, it was on the West Hoathly Road. The 1881 census has Rebecca Worael Clarke and Annie Barroiw Clarke, (complete with the quirky spelling), sisters, aged 42 and 39 respectively, Iiving at ‘Frame Post House’ with 3 cousins and 8 servants. They may, or may not, be connected with Elizabeth H. Clarke, the donor of the East Window. She was a generous patron, and the coloured glass is very beautiful, letting in light and illustrating scenes about the life and death of Jesus.